‘Disability Humour’ – It’s not fun living with a disability, but the humour makes it easier. Before acquiring a disability, my humour, including pranks, would regularly get me into trouble with other people. I took a rubber dog poo into work at Origin Energy and placed it into the filing cabinet of a work colleague. The plan was that they would be shocked, and then realise it was only rubber, and then have a laugh. Instead, they walked into the manager’s office and complained. The boss then came straight to me and asked if I was the offender, and I admitted to it and apologised to the worker. Not everyone appreciates my humour, and that’s ok, they miss out! Terrible things may happen in life, and it helps to have a laugh.

I acquired my disability in 2009 and went through a few bad times. One thing that was suppressed during these times was humour and pranks that I attempt. Just because I have a disability doesn’t change ‘me’, and eventually the humour and pranks came back. And I felt better about myself.

April 1 is a special day for me, and I don’t like to refer to it as ‘April Fool’s Day’. I don’t think its good to think of people as fools. Instead, I see them as someone to share a laugh with. Back around 1996, I mentioned to my sister-in-law, that my wife and I were expecting a baby soon. I added a few truths into the story to make it sound believable and asked her to keep it confidential. Some people cannot keep a secret, and she spread the story around the family. It stopped when another family member asked her if she was aware of the date.

On March 31, 2019, our family cat was recovering from an operation. I was outside and Jasmine, my daughter, carried him outside, and he stayed in her arms for some time. Spartacus typically didn’t like to be held, and Jasmine placed him on my lap. He remained there for over twenty minutes, enjoying the sun and fresh air. Jasmine took a few photos, and I realised tomorrow was April 1st and hatched a prank. Best if I share it now, rather than describe it. 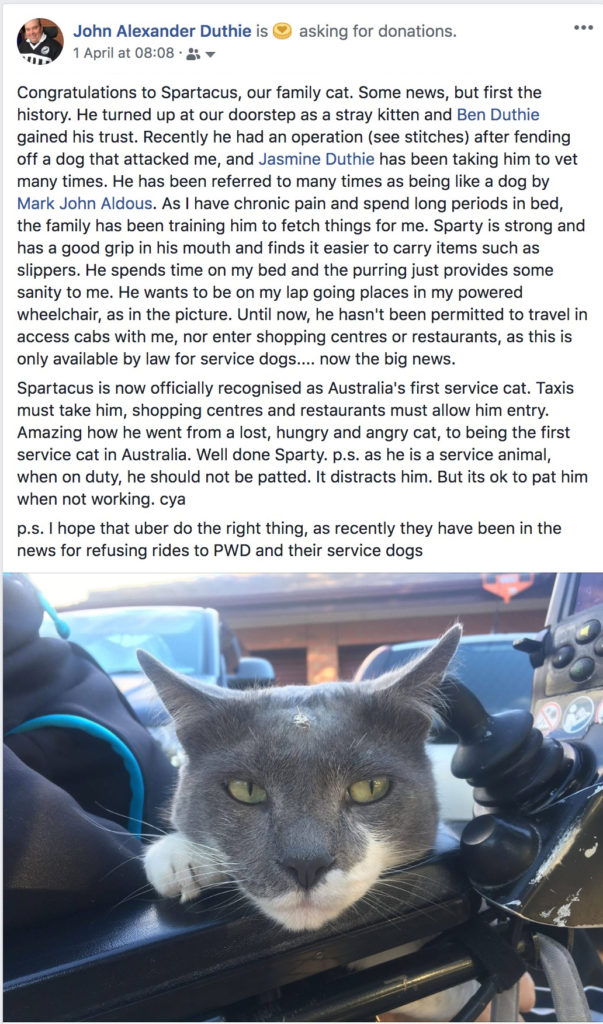 Congratulations to Spartacus, our family cat. Some news, but first the history. He turned up at our doorstep as a stray kitten and Ben Duthie gained his trust. Recently he had an operation (see stitches) after fending off a dog that attacked me, and Jasmine Duthie has been taking him to vet many times. He has been referred to many times as being like a dog by Mark John Aldous. As I have chronic pain and spend long periods in bed, the family has been training him to fetch things for me. Sparty is strong and has a good grip in his mouth and finds it easier to carry items such as slippers.

He spends time on my bed and the purring just provides some sanity to me. He wants to be on my lap going places in my powered wheelchair, as in the picture. Until now, he hasn’t been permitted to travel in access cabs with me, nor enter shopping centres or restaurants, as this is only available by law for service dogs now the big news.

Spartacus is now officially recognised as Australia’s first service cat. Taxis must take him, shopping centres and restaurants must allow him entry.

Amazing how he went from a lost, hungry and angry cat, to being the first service cat in Australia. Well done Sparty. p.s. as he is a service animal, when on duty, he should not be patted. It distracts him. But its ok to pat him when not working. cya p.s. I hope that uber do the right thing, as recently they have been in the news for refusing rides to PWD and their service dogs.

Disability Humour – the reaction on my FB page

Many likes and comments. It was difficult to determine whether some people knew of the date, and were playing along, or were fooled. Probably a mixture of both.

It was great that a few people added more humour, and a couple said they knew it was a prank. Later one person had a laugh at the fact that they were fooled. The prank was about my family cat and me, and I thought it would be acceptable. Similar to Steady Eddy, the famous Australian stand-up comedian with a disability, as he makes jokes about himself. I was wrong.

I posted the exact same prank and got a similar result from the members of the group. But, one of the groups administrators deleted the post, and I heard that other pranks were removed. The admin then created their own post and grumbled about the prank, and suggested that I posted it on a wrong day – March 31. Apparently, I was the fool, so I added an image that showed the time date stamp of April 1. It wasn’t me.

Living a life with a disability is difficult, and I find that laughter is required to help cope. I pulled pranks before acquiring my disability, and I will continue to do it. My cheekiness doesn’t disappear because a tree hit me on the head and back.

I also hate exclusion. PWD should be pranked on April 1. Don’t leave us out.

Check out these people who use humour about their disabilities. And if you ever fly around Australia and use a wheelchair, please read my travel tips.

2 thoughts on “Disability Humour. Living with a disability needs humour (and a few pranks)”