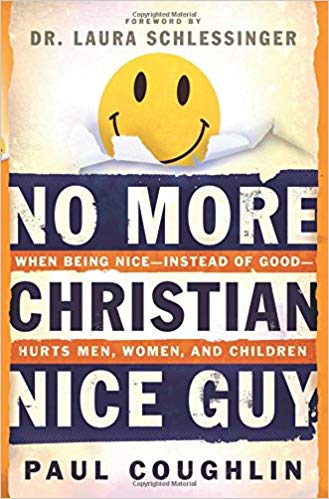 I feel that I’ve chosen to be nice, rather than good. In 2009, I was hit by a tree, and I didn’t have the energy, strength or time to be anything other than nice. This would change over time. The ‘no more christian nice guy’ book has been helpful.

A definition of nice could be ‘pleasing and agreeable in nature’. On the surface, being nice sounds ok. However, nice people keep saying ‘yes’, ‘ok’ and ‘no problems’ to any question or any issue they face.

Paul writes in Chapter 1 of ‘no more christian nice guy’ …

Christian Nice Guys (CNG) pretty much believe they should just let life happen to them.

Theologian R C Spraud ways “When I became a Christian, I understood that Jesus took my sin away. What I never heard from Him was that He intended to take my backbone away”.

Around 2005, my family were heavily involved in serving God in a church. It was a small church, and the people who were good at getting things done would do the majority of the church work.

I worked full-time, Monday to Friday, in a demanding role, and was the father of two young children. Other demands included home maintenance, car cleaning, gardening and more. My service at the church included playing bass in the worship team, managing people to perform various activities and other roles.

The minister wanted the church to pray continuously from 8 pm to 8 am. It was named ’12 hours of prayer’, and all leaders were expected to take part. I would select times that allowed sufficient sleep, as Saturday was the day to spend with my family. This wasn’t good enough for the minister, and I attempted praying from 3 am to 4 am. I slept for 3 hours; drove to the church; attempted to pray for an hour; drove home; tried to sleep again; kids wake up and then I am too tired and grumpy to do anything meaningful with them on Saturday. Then Sunday worship came around and you wonder what happened to the weekend.

The minister enjoyed being surrounded by ‘yes’ people. If you said ‘no’, this was an indication of sin, as you were not doing what God required. It didn’t take long to realise that God wasn’t putting demands on me, it was the minister. It was time to be assertive and say ‘no’, and it wasn’t received well by the minister. My family and God were ok with my assertiveness. A few more ‘no’ answers allowing me time to work, relax, serve God and spend time with family.

Assertive people are able to share their opinions and be respectful of other people. Those that ignore or attack the opinions of others are aggressive. People that don’t make their opinions know are passive.

My current church, Rise Church at Northgate, has assertive leaders, and they welcome feedback from followers.

We need to see and emulate all of Jesus, gentle and rugged and all points in between.

Phillip Yancy wrote “In my prior image, Jesus’ personality matched that of a Star Trek Vulcan: he remained calm, cool, and collected as he strode like a robot among excitable human beings on spaceship earth. That is not what I later found portrayed in the Gospels … Indeed, he seemed more emotional and spontaneous than the average person, not less. More passionate, not less”

Here’s our popular nice guy misconception: Jesus didn’t drink, swear, get angry, use sarcasm, confront, avoid questions, grow impatient, or complain. Conversely, the record shows that he did all of the above, and the gospel includes no apology, confession, or repentance for any of them.

We retain the caricature of Jesus being endlessly patient, yet he turned to his disciples, seemingly exasperated, and said “How long must I be with you until you believe? How long must I put up with you?” The clear teaching is that it’s proper to wait for an unfruitful person or organization to produce, but that there’s a limit to wise patience.

CNGs don’t impose, even when it’s for someone else’s good and when justice is on the line. The god and idol of a CNG is safety.

The early proclaimers and defenders of the faith were not Nice Guys. God’s redemptive work doesn’t grow in the land of Nice. The soil can’t support it.

God himself unleashed a torrent of rhetorical and sometimes sarcastic questions upon Job. “Why do you talk without knowing what you’re talking about?”

Jesus warned that the Pharisees enjoyed putting heavy burdens upon others that they themselves refused to carry, and he combined this spiritual abuse with dripping sarcasm “It is easier for heaven and earth to disappear than for the least stroke of a pen to drop out of the Law” Luke 16:17. The upholders of the law were more concerned with the law than with the lives of people and a true relationship with God. His words only make sense when we realize that he was being sarcastic.

Jesus is also sarcastic in Mark 7:9 where he describes the Pharisees “You have such a fine way of rejecting the commandment of God”

Christ threw exaggerated humour at his own followers when they were immaturely impressed with the crowds they’d created. Jesus corrected them with “Wherever the corpse is, there the vultures will gather” Matthew 24:28. He was reminding them that people gather for myriad reasons, not all of which are good or fruitful.

Whenever we are tempted to think of Jesus as a swell guy who obeyed all the rules, we should remember the Resurrection. Did you know he broke the law when he walked out of the tomb? His resurrection broke Pilate’s seal over the tomb (illegal), and angels struck down government guards (very illegal), both federally punishable by death. Jesus, by legal definition, was a criminal, a fugitive, and outlaw, a rebel with the highest cause.

I recommend ‘no more christian nice guy’ for men who wish to survive and serve in Christian churches. More thoughts from Paul Coughlin (to encourage you to purchase the book)…

When we’re free from the myths that Jesus is the supreme nice guy, that the Father is a cosmic teddy bear, and that the Holy Spirit is a docile, breezy presence, men will find the church more compelling and relevant.

The church encourages Christian men to be passive, and this leads to broken relationships and opportunities. Christians are taught that it’s sinful to tell others what one really thinks and feels. This is damaging because people are naturally expressive.

No man in his right mind gets married to solely to serve. He has wishes, needs, and desires as well. The church has told him this is selfish and sinful. The God-given part of the true man has dignity, including inherent needs and desires.

One wife writes “My husband has no backbone, and it’s hard to respect him. If I’m honest, I don’t respect him. He’s so nonfunctional, and it has gotten me and my family into more problems.”

Why does contemporary Christianity encourage mild living when Jesus showed more passion than anyone else around him?

Jesus was illegally slapped by an official at his so-called trial, and instead of literally turning his other cheek to be slapped again, he stood up for himself and insisted the abuse, this bully, follow legal protocol.

He didn’t follow protocol with the high priest; as recorded in John 18 when questioned about his teaching, Jesus said everything he taught was delivered publicly, that nothing was said in secret. “Why then do you question me” he asked. To his attacker, Jesus responded, “If I have said anything wrong, tell everyone here what it was. But if I am right in what I have said, why do you hit me?”

Jesus did not follow our Church’s current teaching about being a doormat and laying down personal rights, he assertively retained them and laid them down when he chose, not when anyone else required it. Jesus admonishment to ‘Turn the other cheek” does not mean to accept abuse; its means to not return evil for evil. Protecting yourself verbally or physically is simply that, self-protection.

Church culture tells men to give an earnest answer to every question posed – regardless of its intent and regardless of how Jesus handled trickery. When Jesus was confronted with entrapping questions – he either didn’t answer them or he threw out penetrating inquiries of his own.

There are 3 types of men

Passive – these men extend something that looks like grace – a disposition to be generous, helpful, and merciful. However, the reason passive men accept insults and other forms of humiliation is that they fear what might happen with an eruption of conflict – the sound of life happening

Aggressive – these men are more honest – they’re glad to tell you what they’re thinking. However, they lack soul warming grace

Assertive – It’s this type we must seek to be. Our goal is to be like Christ, the assertive one, who extended grace and mercy when it was warranted and spoke the stinging truth when it was called for

What is stopping you from googling ‘no more christian nice guy’ by Paul Coughlin? BTW do you tithe like the Israelites?