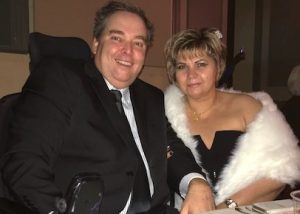 Madie and I attended the “Wild Night in Australia” at Prospect Town Hall on the 30th of September 2017. It was a multicultural music and art night organised by the Divine Orchestra Music Ministry on the last Saturday of September each year. Our friend, Esther Simbi, gave a speech titled ‘Disability doesn’t equate to inability’.

The goal of the night is to create cultural awareness and competence in Australians and to allow migrants and Australians to blend and assimilate with each other. The night supported vulnerable youth and other Australians by developing their music and art talents. In addition to Esther Simbi, there were three other speakers, each with a disability. Carolyn Omenda, the secretary of DOMM, mentioned …

“Recent research has shown that there is a high incidence of depression and anxiety among musicians. With low pay, unreliable work, bullying, stress and other factors all playing a part, supporting people in arts is important in our communities. On the background of this, I would like to encourage the government, councils, and members of the business community to support our programs. Positive engagement of vulnerable people leads to safe streets and strong community bonds.” 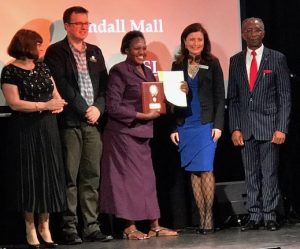 , Dignity Party Upper House candidate in the 2018 election, received an award and the text of her speech is included below the video.

The speech by Esther Simbi

Hi everyone, my name is Esther Simbi. I was born in Kajo-Keji, South Sudan. I contracted polio as a child, which has left me with a deformed painful right foot, weak left leg and weak lower back. I now suffer from Post-Polio Syndrome which is associated with headaches, fatigue and general body exhaustion. I also have scoliosis in my back, but I am determined not to let these giants in my body slow me down one bit. I came to Australia in July 2005 as a refugee, after spending 19 years in three different refugee camps in Uganda where I was exposed to starvation, unclean water, violence, unhygienic living environment and violation of human rights. Having been borne into a culture where disability is considered to be a curse, evil spirit, witchcraft and embarrassment, begging for food on the streets would be my fulltime job but I decided to make a choice that has challenged all the odds. I chose to go to school and then to the University where I obtained a Bachelor degree in Social Work and a Master degree in Mediation and Conflict Resolution from the University of South Australia. I went onto working with Families SA and with the Child Abuse Report Line as a Social Worker from December 2007 to June 2009. I also worked with Disability SA as a Social Worker, Service Coordinator, Intake Coordinator, Case Manager and as a Facilitator for the Individualised Funding Team from August 2009 to July 2013. I recently worked as a Coordinator for the Crossing the Bridge Project which is aimed to provide services to African Women with disabilities in South Australia. I was the founder of the Crossing the Bridge Project. In 2014, I ran for Parliament as a lead candidate in the Upper House with the Dignity Party and I am running again for the next year’s State Election in the Upper House with the Dignity Party as a number 4 on the ticket. 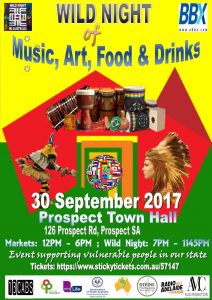 I should have done one thing really after arriving Australia, which is to lie down on the couch and eat a lot of food every day to make up for the years I spent hungry in my childhood and in the refugee camps, but instead, I chose to go to the university, and to work. I also learnt to drive a car and I obtained a driver’s licence within two years of arriving in Australia. I now drive my own car which makes getting around so much easier.

When I was young and before I became pregnant with my first child, people had a lot of theories about me. Others said that I will not be able to have children because of my disability and others told me that I will not be able to carry pregnancy to full term because of my scoliosis, because of my weak back and because of my weak legs. And others told me that even if I will be able to have children, I will not be able to look after them because of my disability! I looked at them, I turned around and I said to them; watch me. People told me to work hard and save enough money to adopt a child but I told them that I will have children of my own and now I’m a proud mother of two beautiful daughters. Against all odds, I went onto having three pregnancies; unfortunately, I lost my second daughter to stillbirth. My second daughter was born premature in June 2015 and she died few minutes after she was born. I want to clarify that, the premature birth of my daughter had nothing to do with the fact that I have a disability but God had his own reasons to take her away from me that early in her life. When I was pregnant with my first daughter, I had people lined up waiting to take my baby away from me because they thought that I would not be able to look after her because of my disability but I proved to them that I am capable of looking after my children regardless of my disability. I am happy to say that even with my disability, I am still able to raise up my two beautiful girls alone without any help from anybody. I remember laying down on the hospital bed two weeks after my first child was born, thinking if I will ever be allowed to take her home with me as the doctors were not in any hurry to discharge me. I was finally discharged but the Hospital Occupational Therapist followed me home 15 minutes after I had arrived home to inspect my house and to determine if my house is a suitable environment for my baby to live in. The Occupational Therapist was blown away after he discovered that I had my house set up ready for my baby. I had a basinet, a baby court and other baby stuff all set up in my house ready for my baby even before I went to the hospital to have her. I gathered that the Occupational Therapist was going to make arrangements to take my baby away from me there and then just because I have a disability but because I was able to prove to him that disability is not inability, I got to keep my baby. If you put your mind to something, your determination will help you to achieve your goals in life regardless of your disability, mental illness, medical condition or any other limitations. If people around you are negative towards you, use that negativity to make something positive in your life out of it. I understand that we have no control over what people think of us or may say about us but if you can, please stay away from negative people and surround yourself with positive thinking people.

I will conclude tonight by saying that whether you are on a wheelchair or you are on your feet, whether you have mental illness or a medical condition, you can make a choice to make a difference in your community regardless of your physical limitations. Don’t let your disability, mental illness or medical condition define you but let your ability define who you are and always remember that, DISABILITY IS NOT INABILITY.  Esther Simbi.

Click here for the book project that Esther is involved with.